In most web application projects there is a design agency involved mostly designing the user interfaces within the corporate design of the company. E2E UI applications come with predefined themes which in some cases might not fit into the companies design concept e.g. integrate the application into the existing corporate portal site.

To be able for the design agency to develop their styles, they need a rough idea and a working file to design on.

Preparing the files for the Agency to work on

To be able to save a working version of a E2E UI application a Firefox Add-On is needed. This is due to Firefox not being able to export CSS content which are referenced or imported. To install the Add-On follow this link https://addons.mozilla.org/en-US/firefox/addon/4723/. The Add-On Save Complete (Version 1.0.1) installs automatically when clicked on the green Add to Firefox button. 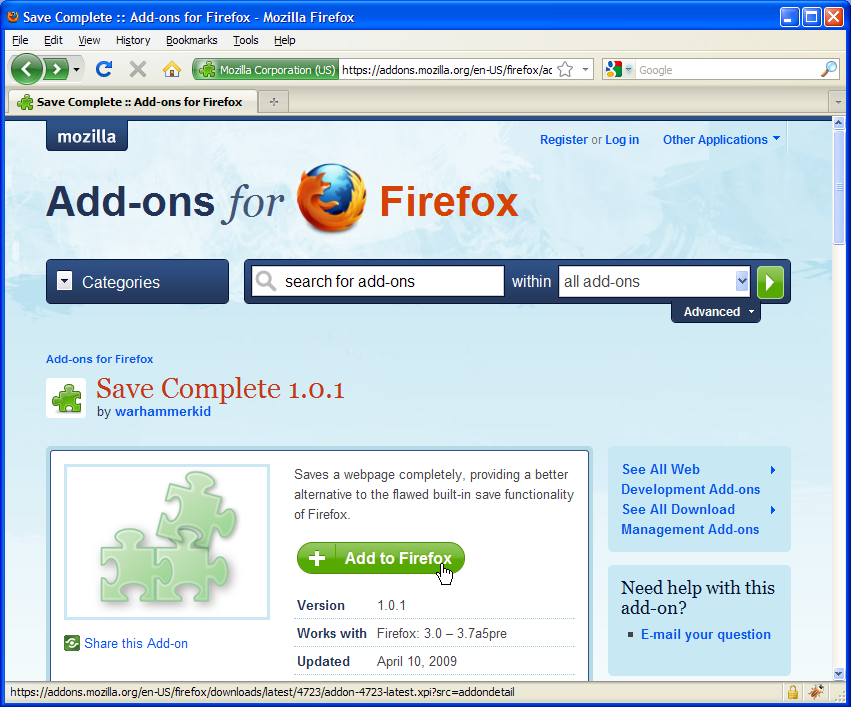 After the installation Firefox will restart and will offer a new File menu entry Save Complete Page As.... Load the page that the agency needs to work with into Firefox and use the new menu entry to save the complete page including all referenced files.

Figure: Save Complete Page As... 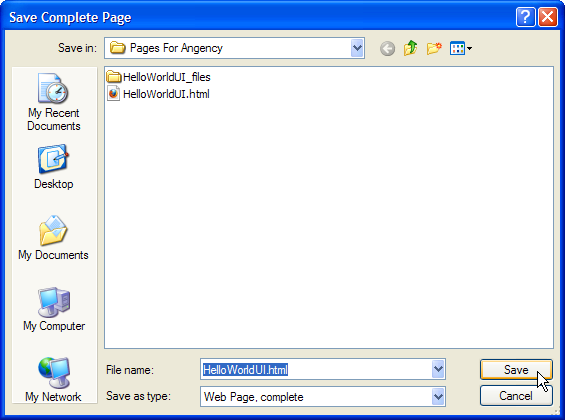 The result is the main HTML file and a folder containing all the CSS and JavaScript files. Both, the HTML file and the folder can now be sent to a design agency and they will be able to work on the look and feel.

Working with a design tool

Most design tools offer an import mechanism for existing pages or whole sites. This can also be done with the package that is saved via Firefox for external design implementation. Important though is, that the CSS files are amended without changing the class names.

To close the cycle, the changed design, coming from an external party, needs to be re-imported into the E2E Builder Project. To be able to understand what happens to the design that gets re-imported it is essential to know about how styles are handled during runtime within the browser.

Overwriting or extending a CSS class is a mechanism which is used to lay over the amended design over the predefined one. When the E2E UI application is loaded, the external references to style sheets and JavaScript resources are loaded. The default style sheet initially defined is loaded first due to its style sheet reference within the HTML file is in top order. The imported style sheets follow in lower order and are loaded after the default is loaded. Now, if the class name .menu of the customized style is loaded second, it will overwrite or extend the CSS class attributes.

The above table shows the loading order and the effect of the overwriting (.menu class) and extending (.menuitem class) classes. The class attributes in bold are changed by the customized.css class definitions.

To have more control on UI elements, it is possible to assign a custom CSS Class on the <<UIPackage>>, <<UIContainer>> or <<HTMLElement>>. This is helpful if there for example needs to be special design implemented. This css class definition is implemented in a custom css file which needs to be imported into the project to take effect. 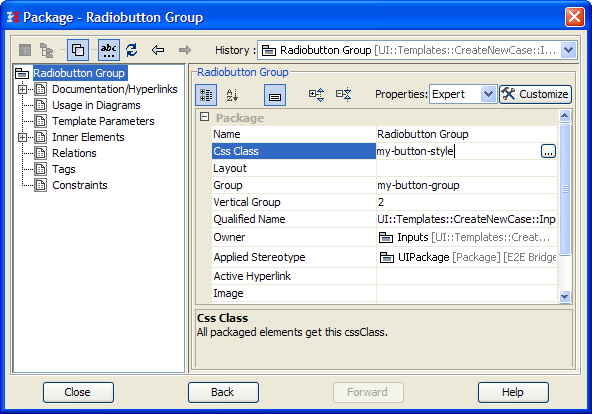 Despite if it is a single new css file or a customized theme package the customized styles are imported into the project using the Resource Importer.

As described previously the changed CSS attributes will overwrite and/or extend the built in jQuery Theme CSS definitions. When using the online Theme Roller, the CSS class names will match the names of the jQuery default definitions. 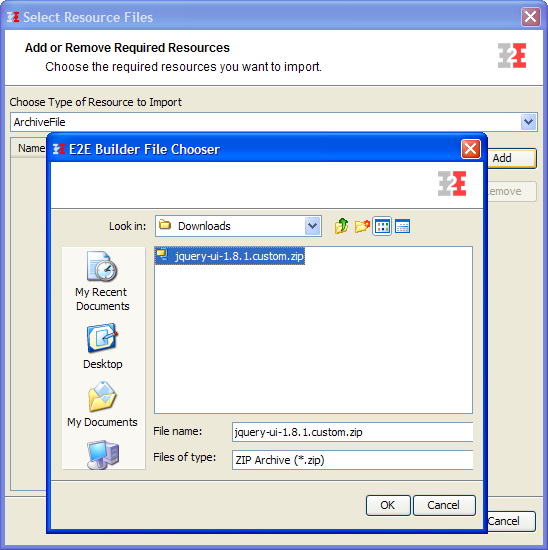 A custom theme package is an archive containing not only CSS definitions but also image and script resources which are needed for e.g. displaying the different widgets. All these files need to be imported with the setting Extract All set to true. When deployed, the archive will be extracted and available to the user interface application. 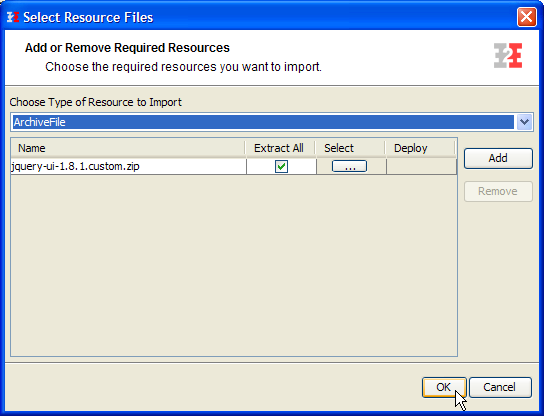 When importing ThemeRoller themes, it is essential that the main CSS theme file is added as a single resource. Only this way the resource can be identified and added to the Component Diagram. Selecting a main CSS resource is not only important when importing ThemeRoller archives, it is important to do so with all design archives which have one main style sheet referencing other style sheets or images. 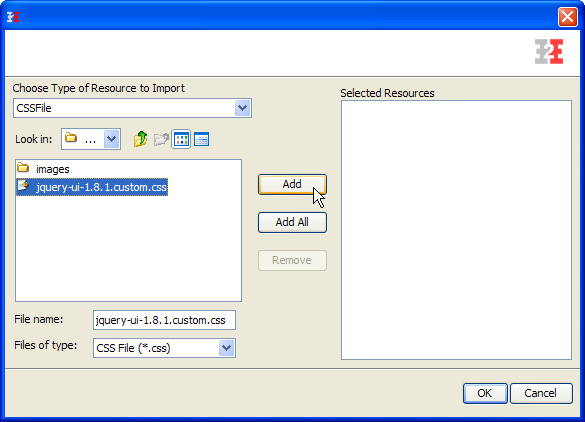 It is essential when choosing the jQuery UI main CSS library to have the resource type set to CSSFile in the Choose Type of Resource to import drop down list. This rule is valid for any CSS file which should be imported and used within the application.

Importing a custom JavaScript or CSS

Importing custom JavaScript files as well as custom CSS files follows the same process. Important is, that the Type of resource is set in the import wizard. Only this way it will be handled properly. 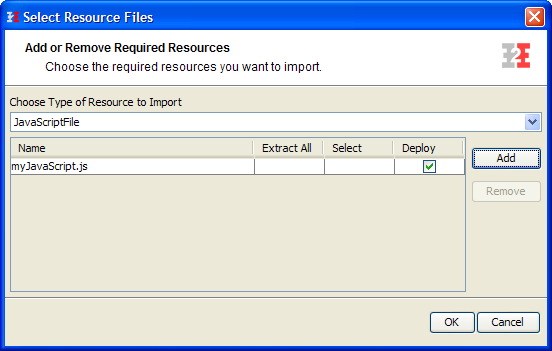 As with all imported resources, they are made available in the Magic Draw Containment tree. The resources them self are not needed in any model or diagram. They are added to the UIRepository in the Component Diagram. 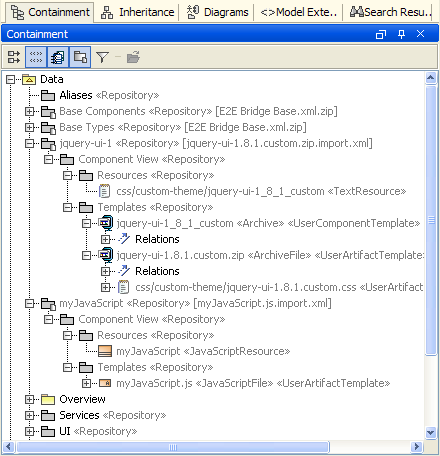 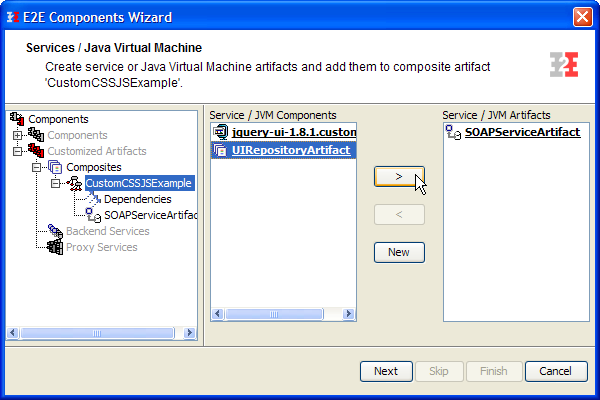 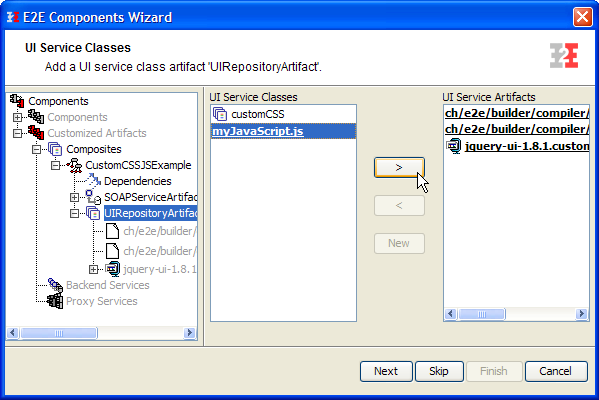 When importing a jQuery UI Theme, despite of if it was created using the online ThemeRoller tool or if it was developed manually, it is important to set the Default Theme to <none>. In general the imported theme's CSS classes will overwrite the built-in ones but it would take longer for the Browser to download the CSS files. 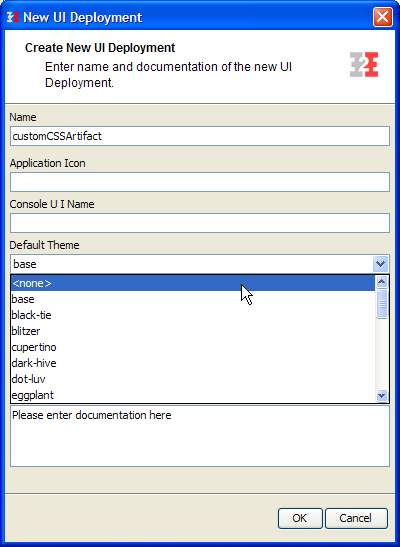 After deploying the xUML service and opening the user interface, the theme will be changed from the built in one to the custom designed one.

CSS and JavaScript as Global Resources

This feature needs an E2E Bridge installation to work or manually copying of the resource files into the bin/resource directory of the E2E Builder Project.

Next to bundling CSS style sheets and JavaScript files with the xUML service it is also possible to separate them from the service and make them be part of the xUML Runtime's global resources. This allows even more freedom for designers and developers to work independently on a project. Further a big advantage to keeping resources globally accessible is the fact that all xUML services can share them which of course keeps maintenance efforts low and changes to the design extremely fast (e.g. change or corporate design).

To make this possible, the relative references to the CSS and JavaScript files need to be set within the component diagrams <<UIRepositoryArtefact>>. Within the Global Resources section of the objects specifications there are two tagged values, Styles and Scripts. Both of these tagged values hold a list of paths to the resources relative location. 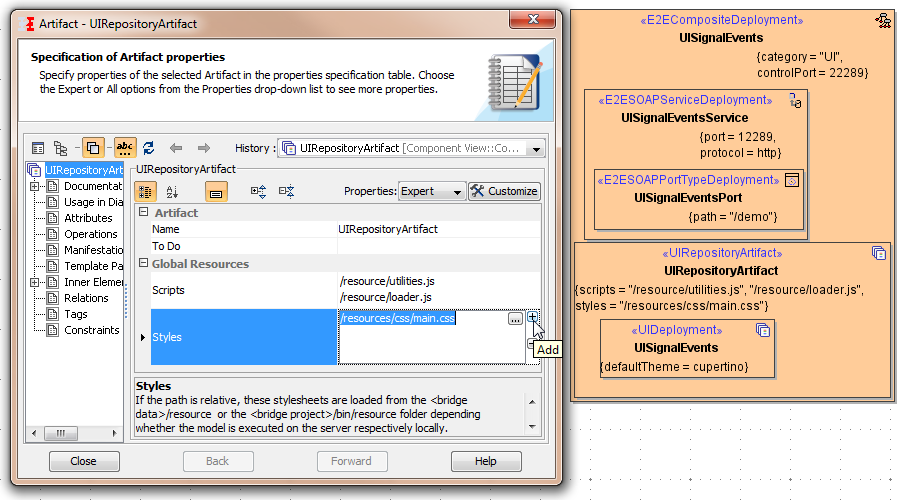 How to upload global resources is described in the E2E Bridge User Guide. Next to upload single files, whole zip and jar archives can be uploaded and at the same time be extracted.

The global resources are deployed either as single files or as a directory structure by upload and extracting a zip or jar archive. To deploy the resources, access the E2E Bridge via it's administration interface and upload the resources as described in Deploying and Managing Resources.

As with JavaScript it is possible to debug CSS styles. The tool recommended is Firebug which is also used to debug E2E user interfaces. Especially when overwriting style sheet classes it is essential to be able to follow the loading sequence and which class is overwritten and which CSS class attributes are involved. 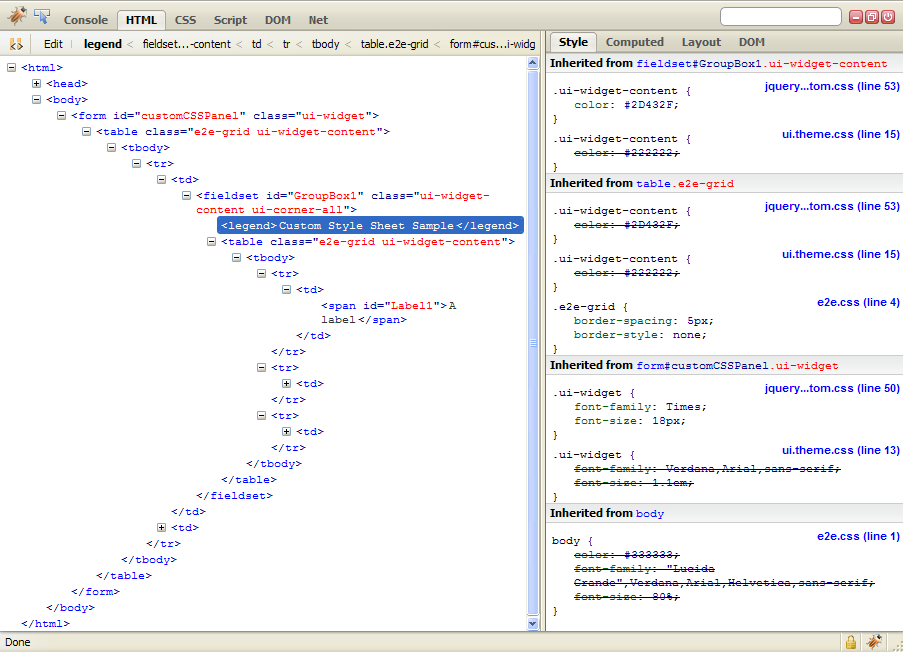 The CSS debugger is opened by clicking on the HTML tab in the Firebug menu. The debugger is a combination of the page structure with all its HTML elements, which is shown on the left, and on the right side the CSS classes which are defined on the corresponding element. The CSS classes are organized in the loading sequence starting from the bottom. Each sequence step belongs to a CSS definition which resides in a style sheet file e.g. e2e.css.