The operation IDOC_INBOUND_ASYNCHRONOUS gets called when SAP is transmitting an IDoc to the Bridge. The implementation of this operation can be found in the next section.

The transaction handling is separated from the actual exchange of data and must be handled by implementing all of the following callback operations:

However, IDOC_INBOUND_ASYNCHRONOUS uses table parameters only. This function will be called, if the SAP system sends IDocs to an (t)RFC server. The IDoc is delivered as two tables. Both tables are associations of the IDOC_TABLES class (see figures at RFC Arguments). For details regarding IDOC_INBOUND_ASYNCHRONOUS, refer to the SAP documentation.
The current example implementation just writes the IDocs to the file system and writes a notification to the service log. 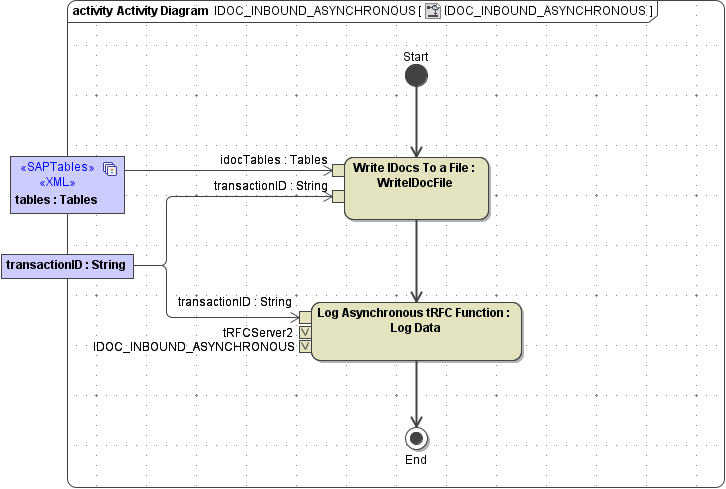 Only inbound data flow is allowed for SAP tRFC functions. That is tables and importing parameters. Additionally, when implementing a tRFC function, the modeler can access the current transaction ID via the transactionID input parameter.

Each <<E2ESAPRFCService>> that uses tRFC contains at least two residents:

The tRFCService has the following tagged values:

On the composite, you can also set a service-wide SAP value padding: Never, Always and Mixed. See Frontend Components for more information.

The program ID must be defined on the SAP system in transaction SM59. This transaction enables the user to define TCP/IP connections (connection type T). Each such connection has an associated program ID that must be exactly the same string as used for the tagged value programID on the <<E2ESAPRFCService>> component. Note, that this string is case sensitive. On the <<E2ESAPRFCService>> component, you also specify the port number of the SAP gateway the server registers on.

The Model Compiler throws an error, if a composite service contains more than one <<E2ESAPRFCService>> component. This constraint is given by the very nature of a SAP gateway. Each operating system process must register exactly one program ID at the gateway, otherwise the dispatching of SAP requests to the RFC service is not unique. Now, each xUML service runs in its own Bridge process, thus unique dispatching can only be achieved by allowing only one RFC service - i.e. one program ID - per xUML service.