On this Page:
Related Pages:
IDocs (Interface Documents) are the most common way of interchanging data asynchronously with SAP R/3. IDocs consists of control and data records. The control record contains data like IDoc type, sender, receiver, IDoc number and many others. Its purpose is to control the routing and handling of the IDoc. The data records are called segments. Each segment has an 63 byte long header and a 1000 byte data part.

The most simple IDoc is TXTRAW01 containing as data part just a string. The IDoc header contains information like segment type, segment number, parent number, and so forth. The parent number is used to link the segment to other segments building a hierarchical structure. The data part consists of values put in position dependent slots. The information which data attribute is found on which position can be found in the IDoc parse grammar (WE60 - choose IDoc type - click on Parser (F9)) on your SAP system. More information about IDocs can be found in the SAP Library help.
The result of importing TXTRAW01 together with the description of the SAP parser grammar to UML mapping is shown in the class diagram TXTRAW (see figure "Example Of an Imported TXTRAW IDoc").

The modeler must execute the following steps in order to get UML classes of a SAP IDoc:

Structure of the Imported Classes

The result of importing SAP IDoc parse grammars will be a set of classes being of stereotype <<SAPIDoc>>. Such classes must be derived from the EDI_DC40 class which holds all attributes found in the control record because the control record is common to all IDocs (see figure "Example Of an Imported TXTRAW IDoc").
Each segment is modeled as class of stereotype <<SAPIDocSegment>> that has an association to the IDoc class or to other segments. The association end name and multiplicity is given by the segment name respectivly the LOOPMIN/LOOPMAX numbers in the SAP parse grammar.

An example of a SAP IDoc parse grammar is:

If segment STATUS is MANDATORY and if LOOPMIN is 0, the lower multiplicity is set to 1 to be consistent.

Segment attributes can have the following tagged values:

The base grammar does not contain simple type information – every data element is of type String. Therefore, if it is required to use other base types (such as e.g. numbers, because you want to do some calculations), it is necessary to import additional meta-information of the simple types of the data segment attributes. Without this information it is not possible to convert IDoc segment attribute types automatically to internal types.
This information is typically found in the HTML descriptions of IDocs. The HTML documentation can also be generated within transaction WE60. The generated HTML documentation is then used as input of the IDoc Importer, which maps the segment attribute types to internal types.

The mapping is as follows: 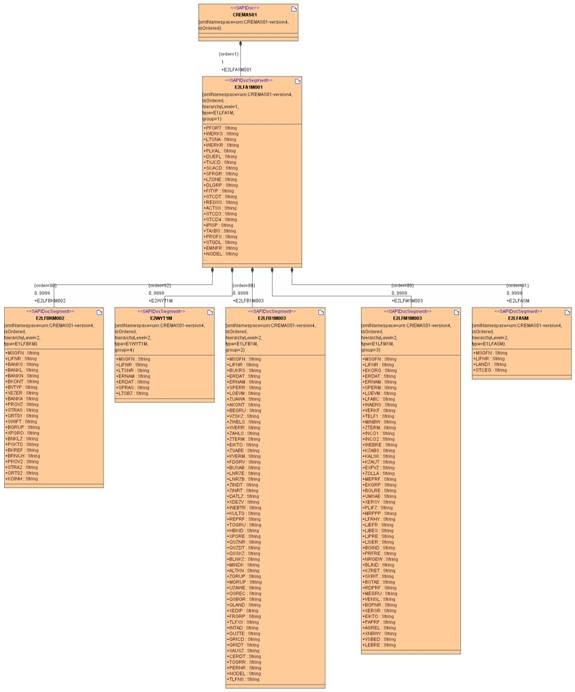