The WSDL Generator for SAP RFC service creates WSDL-Files from SAP RFCs in order to import them into a Builder project. The service provides a user interface (UI) to trigger the generation. With this UI you can either request a list of RFCs by putting them into the corresponding field in the UI, or you can specify a simple file as input containing a list of all RFCs. Using a file might be handy in case you have to recreate the WSDL at a later date.

Get the latest version of the WSDL Generator and unpack it to a folder of your choice. This ZIP package contains two services:

Use your preferred version. You may even use your own ports by changing them in the model.

To use the RFC WSDL Generator, you can either ...

The following example explains how to set-up and run the service with the embedded xUML Runtime.

Setting up the WSDL Generator

Optional: Preallocation of the UI Fields

In the general settings of the service, you can specify the location of the RFC file list to preallocate the initial values for the corresponding fields in the UI of the service.

You can also specify the host of the SAP system in the setting ConnectionString. The specified host will then be set in the WSDL file as SAP node.

If you prefer to input the RFC names by file, prepare a file contaning the name(s) of the RFC you want to extract from the SAP System. Just put one name of RFC per line of the file. The file extension does not matter. 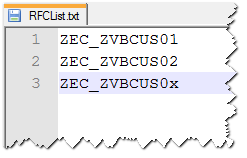 Save the file to your preferred location.

As you now have set-up the service, you are ready to generate WSDLs.

Figure: UI of the RfcWsdlGenerator 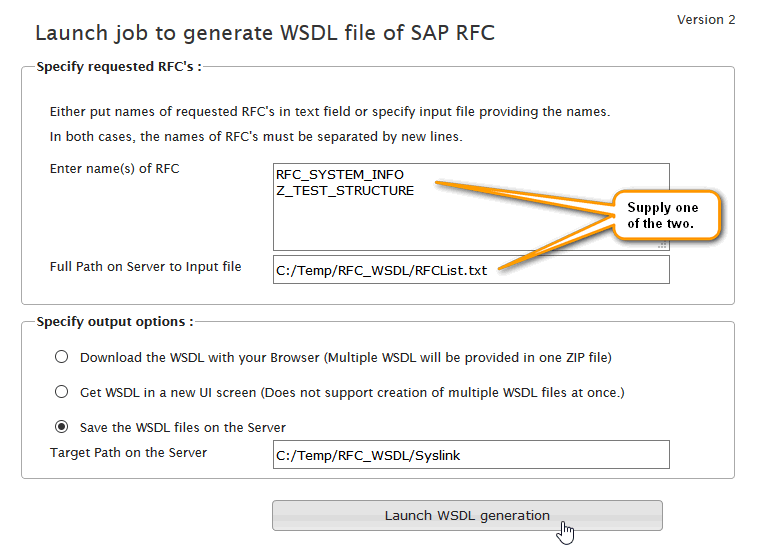 Click Launch WSDL generation to start the generation of WSDL files for each RFC specified.

The generation is finished when the server log states: Info:User:AppLog:A10:RFC-WSDL-Generation finished
You then will find the WSDL files either in the specified output path, or in the download area of your internet browser.