The main tagged value provided by the <<PersistentStateAdapter>> stereotype used throughout this chapter is action. It describes the adapter functionality to be invoked. Currently the following actions are supported:

After an object has been created, the only way to influence its behavior is to send signals targeted at this object. These actions are described in detail on Sending Persistent State Signals.

To create a persisted instance of an object, an instance of the stereotype <<PersistentStateAdapter>> with action set to create is used.
The compulsory tagged value class defines the type of the created persistent state object. This class always has to be of stereotype <<PersistentState>>. A reference to it will also be stored in the attribute classifier of the returned handle.
There are two ways to pass the initial values of the created object:

In both cases, at least the primary key attributes have to be provided. The resulting object has to be unique in the state database. Otherwise, the object cannot be created and an error will be thrown.
The effect of this action is that the transition from the objects initial state is executed synchronously. For example, in the PurchaseOrder state machine (see figure State Machine Diagram of a Purchase Order ), the transition from the initial state is triggered and the event handler Initialize Handler is invoked. If an error occurs while processing the initial transition, the creation of the object will be rolled back and an exception is thrown.
After the create action, the object is ready to receive signals that trigger state transitions.
The create action returns an instance of the class Handle which is a reference to the created object. This handle can be used to send signals to or get copies of a persistent state object. 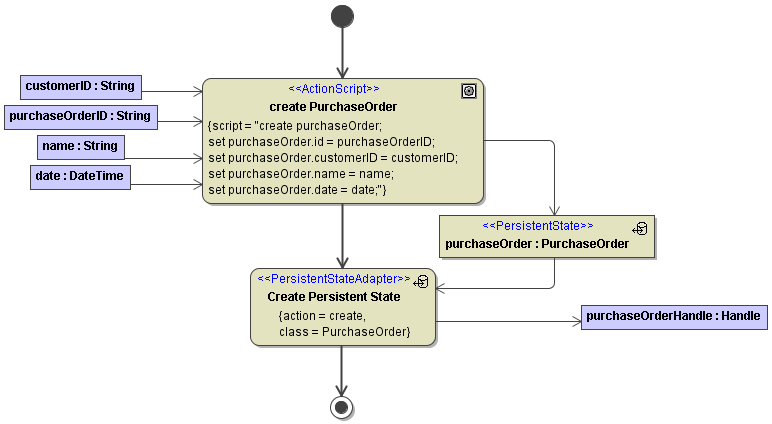 If errors occur in the context of the activity diagram, they must be handled, otherwise, all persistent state actions, including create, are rolled back.

Find a list of all persistent state error codes on System Errors of the Persistent State Adapter.

After creation, an object handle represents a persistent state object. With these handles, it is possible to retrieve information about and to send signals to the represented objects.
While a handle is returned by the create action and can be passed as parameter in and out of operations and services, it is also possible to retrieve a handle for an object specified by its primary key and class.
A <<PersistentStateAdapter>> instance with action set to getObjectHandle is used to implement this functionality.
The compulsory tagged value class defines what kind of object to look for. This class always has to be of stereotype <<PersistentState>>. A reference to it will also be stored in the attribute classifier of the returned handle.
As input, the persistent state adapter requires all primary keys as defined in the given class. In our example, the attributes id and customerID have the stereotype PrimaryKey and identify a persistent state object unambiguously (see class diagram in figure A Persistent State Class ). The input object flow states purchaseOrderID respectively customerID are mapped to these attributes.

If the result set is not unique, or no persistent state object could be found, an error will be thrown that should be handled. This is not done in this example. For more information about error handling, see section Modeling Error Handling.

If no error occurs, the result is returned in an object of type Handle.

Find a list of all persistent state error codes on System Errors of the Persistent State Adapter.

An object handle represents a single persistent object instance. The previous explains how to do this for exactly one handle. However, it is frequently necessary to retrieve sets of object handles that fulfill certain conditions.
This can be achieved by using the <<PersistentStateAdapter>> and the getObjectHandles action. The result of this action is an array of handles that corresponds to persistent objects of type class that comply with the criteria given in the identifierCondition.

If no persistent state objects could be found, no error will be thrown. The array of handles will be empty.

In the example below, all open purchase orders, for which the identifier conditions evaluates to true, are retrieved. These purchase orders are stored in the array poHandles.

Besides using identifier conditions, it is also possible to have a state condition to select objects being in a given state. This is done using the stateCondition tagged value. It refers to a given state. An example can be found in the activity diagram Get Purchase Orders By Date described in Getting Copies of Persistent State Objects.

Getting Copies of Persistent State Objects

The <<PersistentStateAdapter>> action getObjectCopy returns a copy of a given persisted object. As input, the action requires an object handle.

Runtime 2019.10 Builder 7.6.0 If you have defined the persistent state class as to have external attributes (see Persistent State Classes > External Persistent Data), these attributes will only be loaded to the object copy, if you set tag withExternals to true on the adapter action. 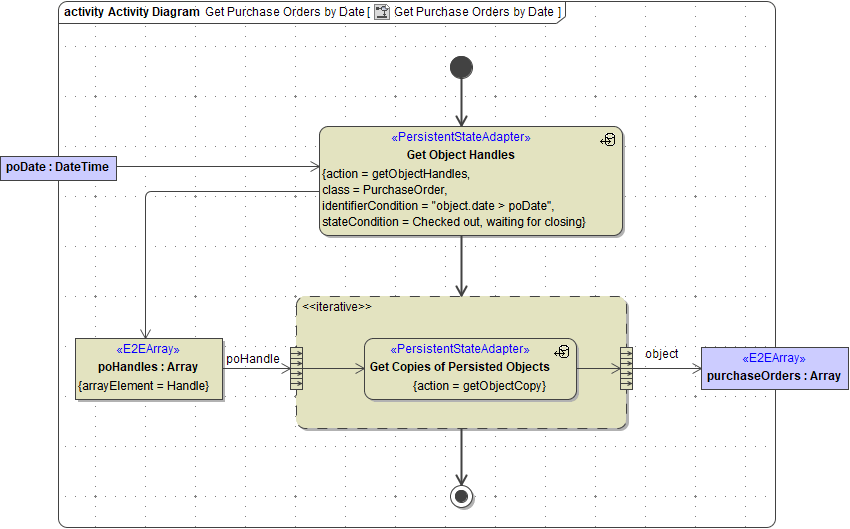 Runtime 2019.10 Builder 7.6.0 You can define persistent state attributes as to be external (see Persistent State Classes > External Persistent Data), so their content will only be loaded on demand. This applies to getObjectCopy as well as to the self context within persistent state transactions.

To load the externally stored data in self context, you need to call the <<PersistentStateAdapter>> with action loadExternals. 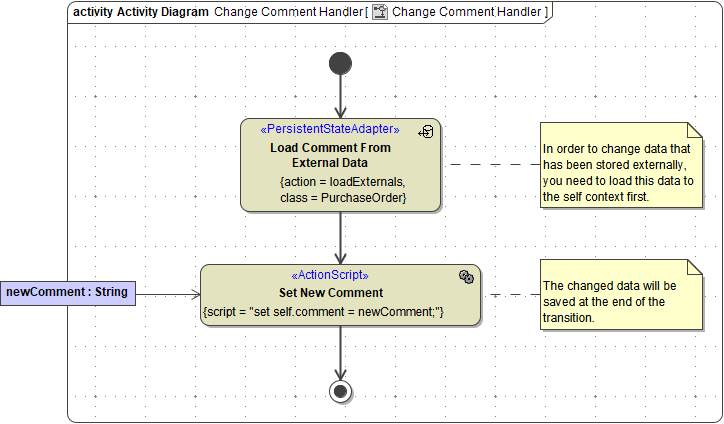 If you change external attributes in self context, they will be stored at the end of the transaction. This applies only if they have been loaded before.

Deprecated This function is deprecated. Please use the Persistent State Control Adapter instead, esp. queryObjects().

The <<PersistentStateAdapter>> action getStateInfo returns information about the current state(s) of an object.

A persisted object can be in multiple states at once. The obvious case occurs when using fork to split the process flow into parallel execution. The other, non-obvious but more common case is the use of composite states. When inside a sub-flow, the persisted object actually is in two states: the current state inside the sub-flow and in the enclosing parent state.

Output of getStateInfo is an Array containing elements of type StateInfo:

Sometimes there is a need to update the database (and trigger the persistent state engine) somewhere in the middle of of a request (e.g. for persistent state conversations, see Conversations). This can be done using the commit action on the <<PersistentStateAdapter>>. 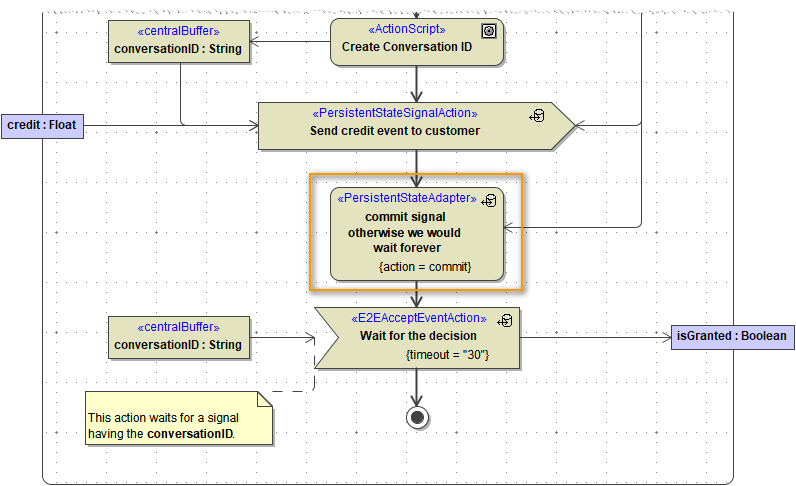 Because of the transactional nature of bridge requests, changes to persistent state objects (including regular or conversational signals) are not written to the persistent state database right away. Until such changes are committed (see also Committing Changes to the Persistent State Database), they are kept in memory only. If an error occurs while working on a persistent state object, any changes that are not yet committed will be rolled back automatically. This rollback can be triggered manually by calling the <<PersistentStateAdapter>> with action rollback.